Helen Hartley has a strong belief in creating frameworks for success. Her consulting skills facilitate pragmatic and practical possibilities that consider the operating environment of the business, including the industrial context. The world of work has become very complex and Helen’s extensive work experience enables her to provide creative solutions to complex HR issues.

To that extent, she has been a confidant, partner and coach to CEO’s, Managing Directors and Senior Managers enabling them to develop professionally and personally which in turn allows them to responsibly drive the results required in a rigorous business enterprise.

Helen understands that making personal and professional change takes an enormous commitment. With a belief that you can only champion growth in others to the extent to which you are prepared to grow yourself, she is a lifelong learner who has amassed an impressive level of knowledge, skill and qualifications. You see, Helen started her working life as a hairdresser, owned two salons, studied at university while working full time in a job that had a very heavy domestic travel load while raising two daughters. She was the first married woman (with children) appointed to a senior management role and transferred halfway across the country.

Having started at the bottom she understands the impact business and HR decisions can have on the frontline staff. As such, she encourages her clients to expand their self-awareness.

Her work draws on her extensive domestic and international HR experience and has worked for such notable companies as Schwarzkopf, Levi Strauss, and Duty-Free Stores owned by Louis Vuitton Moet Hennessy (LVMH Group). Helen has worked in the United States, New Zealand, Germany, and India and Asia where she has facilitated or co-facilitated at both the strategic and tactical level.

Helen partners with other suitably qualified and experienced HR professionals within her HR network to achieve your results.

You will find Helen and her associates approach refreshing. It’s about what can be done! 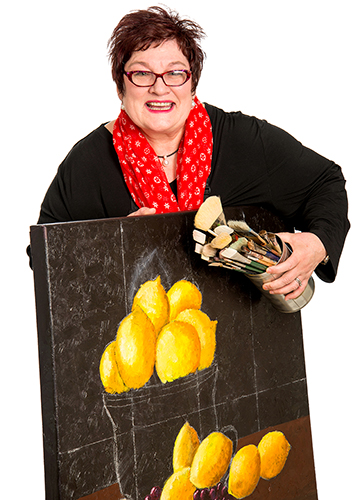 On a more personal note, Helen has quite an artistic streak. She loves most music and as a child, was classically trained on the piano. Her love of music also extends to the theatre, ballet and art. A budding artist, of art, Helen thinks it is one big problem-solving activity which can be frustrating, illuminating and when she gets right into it, she says it’s like meditation. You just go into the art, live in the moment, work it through and not be disturbed by the outer world or the complexity of the piece you are working on.

She has been a student of life and alternative ‘things’ since her early twenties and studied concepts that are only now making their way into the mainstream. She learnt quite young that circumstances that occur in life can either leave you as a victim or a survivor. She was never one to be beaten and thanks to her father, it never occurred to her that she couldn’t do or achieve anything she wanted.

Helen’s next great love is travel. As a child, her parents would take her to watch the planes take off and land. She would announce that she would be on those planes one day, travelling to who knows where. Well, she did. In the earlier years, because she could not afford to travel she decided that getting a job where travel was part of the deal was very attractive. She loved doing the global thing and still loves the exhilaration of the take-off and landing as much as when she was that very young girl at the end of the runway.

She learnt that life sometimes does not go as planned. In 2009 she was diagnosed with Breast Cancer, a club you never want to belong to! Along with a great medical team, the love and support of her husband, parents and friends she’s still here! When confronted with her own mortality, she says,  you become tougher in some things and in others, softer. There is no bargaining with the universe so you just get on with it! Learning about acceptance and detachment and not sweating the small stuff has been quite a profound and ongoing process.

Life is to be lived.  We all have a story and Helen finds peoples stories fascinating. There is always something behind the smile, frown or other facial expressions. More can be said about peoples actions.  Look closely and you will see and learn a great deal.

“Music SA was in need of professional HR guidance and advice in 2015 and Helen Hartley was highly recommended by a colleague and friend.   She was engaged to assist the board of directors of the organisation to develop a new strategic plan.  Helen did not disappoint. She lead the group through a very challenging task which ended in the group feeling united and engaged in the process.  Helen was instrumental in assisting the board to develop and agree to a vision and objectives for the years ahead.  Her support and the time she gave us was generous and extremely helpful.  On behalf of Music SA’s board,  I’d like to thank Helen for her highly professional, insightful and dedicated approach throughout the process.  I will always be grateful.”

I know we formally thanked you in the last session but I just wanted to add my personal thanks for your work with us (and me!). I found it very useful and compelling and I think it will help address many of the issues facing AIB staff now and into the future due to the relentless change and pressures of this (higher education-based) industry.

I have worked with Helen Hartley over the past 6 years where she has been engaged as a consultant by my last two employers to produce and deliver a variety of training, workshops, and development programs in the areas of Leadership, Management, Communication and Customer Service.

Helen has extensive knowledge of Organisation Development, Management and Leadership theories and is an accredited practitioner in Myers Briggs psychological profiling and Benchmarks 360 ° feedback development process.  This knowledge combined with Helen’s senior management and international experience means that Helen is equally comfortable training or coaching senior executives, middle management, emerging leaders and academics. Helen’s warm and engaging communication style means that she is able to draw from her extensive business experience to provide real life examples to complement the learning for participants.

I value Helen’s advice and counsel and would highly recommend Helen of HR by Design to other business that would benefit from these skills.

I have worked closely with Helen Hartley for almost four years as she assisted me in developing and implementing a business plan to start a new psychology business.  During that time Helen provided me with accurate and timely advice about everything an inexperienced business owner needed to know.  Helen’s skill set is impressive. It ranges from marketing to industrial law, contracts, staffing and all Human Relations issues. She is an energetic and inspirational woman who leads by example.

Helen is generous with her time and treats all her clients as valued friends.  She is hardworking, knowledgeable and utterly professional in everything she does. She has particular strengths in  analyzing conflicts in the workplace and keeping people accountable and task orientated, rather than getting lost in the emotion. If you ever need support in terminating employment contracts, Helen will guide you in how to do that professionally with respect for each person involved. I wholeheartedly recommend Helen’s services to anyone needing a wise business mentor and coach.

HR by Design provided Sight For All with advice, support and assistance when we needed it. Helen is such a joy to work with. She brings a wealth of experience, coupled with up-to-date knowledge. We highly recommend working with HR by Design

Helen is an outstanding facilitator. She is both knowledgeable and engaging. She gets consistently high feedback from participants. Helen’s approach is both collaborative and creative. She is flexible and personable, always easy to work with.